Our medieval hamlet, the roots of which are intertwined with those of the castles and fortresses that overlook the valley of the Orcia river, the historical land of perpetual Sienese battles, is today a serine setting, ideal for exclusive events, including weddings, conferences and seminars.

The history of Borgo di Castelvecchio is lost in the mists of time. In the middle of the Orcia valley, a stone's throw from Radicofani, Pienza and Montepulciano, the Perignano castle, towering over and protecting the hamlet, was an essential lookout post during the battles between the Guelfi, Ghibellini, Florence and Perugia. In the past the estate was owned by some of the most influential medieval families of the Tuscan region, the Burbon Del Monte and later the Morelli family. Today the hamlet and the annexing territories, proudly run by the De Angelis Gaetani d'Aragona family, are still very much the same as they once were. Their extension can be admired in the antique topographic map that to this day hangs at the top of the villa's stairs.

The Castelvecchio Agricoltural Company extends over 800 hectares, between fields and woodlands. It has a long history cultivating wheat, barley, fodder and alfalfa. Perfectly nestled within its cultivations, the estate includes, of course, a small wine yard which produces a fabulous DOC Orcia red wine denominated “Il Perignano”, in honour of its historical castle that was destroyed by the Sienese in 1567. The hamlet is also surrounded by 1500 olive trees that produce an excellent, hand picked and cold pressed extra virgin olive oil. In the heart of both the UNESCO world heritage site of the Orcia Vally and the National Park of the same designation, Castelvecchio is also enriched by a hunting reserve where pheasants, deer, roe deer and wild boars can be observed thanks to special hunting shelters.
FIND OUT MORE

Landing is permitted only after booking and upon your arrival you will be greeted by a chaperon who will escort you to the hamlet where you will find rooms for overnight stay and excellent replenishment services.

We offer a car hire on request.

We use cookies on our website to give you the most relevant experience by remembering your preferences and repeat visits. By clicking “Accept”, you consent to the use of ALL the cookies.
Cookie settingsACCEPT
Manage consent

This website uses cookies to improve your experience while you navigate through the website. Out of these, the cookies that are categorized as necessary are stored on your browser as they are essential for the working of basic functionalities of the website. We also use third-party cookies that help us analyze and understand how you use this website. These cookies will be stored in your browser only with your consent. You also have the option to opt-out of these cookies. But opting out of some of these cookies may affect your browsing experience.
Necessary Sempre abilitato
Necessary cookies are absolutely essential for the website to function properly. This category only includes cookies that ensures basic functionalities and security features of the website. These cookies do not store any personal information.
Non-necessary
Any cookies that may not be particularly necessary for the website to function and is used specifically to collect user personal data via analytics, ads, other embedded contents are termed as non-necessary cookies. It is mandatory to procure user consent prior to running these cookies on your website.
ACCETTA E SALVA 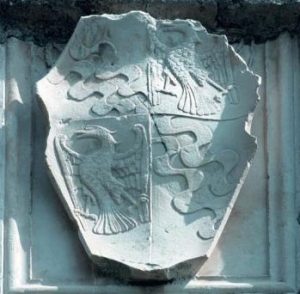 Castelvecchio's history is intertwined with those of the castles and fortresses that overlook the valley of the Orcia river, the historical land of perpetual Sienese battles. The past, rich of struggles and adventure, can still be felt within the thick, strong walls that were raised for fortification during long periods of unrest: From the Etruscans of the Iron Age, to the Germanic invasions by the Lombards, and all the way through to the Middle Ages and the French domination.

The first official historical documentation of the estate dates back to 1279 with the death of Napoleon Visconti who is said to have died within the walls of Castelvecchio castle. However, the origins can be dated back at least to 1064 when Castelvecchio was first mentioned by historical texts as being in a strategic position along the Via Franchigia. At that time it was reported that the inhabitants of Castelvecchio had joined forces with those of Borgo del Formone in the attempt to protect the land, both against the overflow of the Fermone and Orcia rivers as well as against the attacks of outlaws.

During the Medieval period Borgo di Castelvecchio was at times a spectator and at times a participant of the ongoing battles between different feudal lords governing the Republic of Siena, Orvieto and Florence. Castelvecchio was owned by the powerful medieval family of the Visconti from 1279 to 1339 and from 1369 to 1429 by the Salimbeni family, who were known to have switched loyalty between the two opposing factions, the Guelphs and the Ghibellines, in a game of changing alliances. In the XVII century 4 farms belonging to the Castelvecchio estate were acquired by the Bandinelli family who were the Lords of Siena and owners of Montalcino, Castiglion del Bosco, Abbadia Ardegna e Campiglia. The Burbon del Monte Marquises were in possession of the estate until it was gifted as dowry of the young Antonietta who had been wedded to Count Aleberto Morelli Ademari in 1900.

In1959 the whole property was acquired by the De Angelis family. Today it belongs to the De Angelis Gaetani d'Aragona. In the same territory another important castle dominated the Orcia Vally. The Perignano Castle, who's ancient front gates still protect the entrance of the Villa, was destroyed in the last violent conflict against the Sienese in 1456.

Produced by Castelvecchio Agricultural Company, it is sold in packs of 3,6 or12 bottles.

Castelvecchio Extravirgin Olive Oil
The olives are hand picked with care and the oil is mechanically extracted by the traditional technique of cold pressing in the neighbouring mill that serves the surrounding territories.

Castelvecchio Honey
Our multi-flower honey is produced thanks to the hard work of the bees that collect nectar from around the Val d'Orcia National Park.

The following products may be acquired at the reception of the Borgo:

Castelvecchio Extravirgin Olive Oil
Sold in bottles of 0.75L or in aluminium decanters of 3 or 5 L.